The last day began dismally. Gray clouds claimed residence of the sky overnight, and began releasing droplets of rain by early morning. Riders were instructed to travel with great caution as mud, puddles, and slippery roads could lead to unwanted accidents. Though the rain grew heavier throughout the first half of the day, the Lord’s grace was so thickly upon each team that all the riders arrived to the lunch checkpoint without a scratch. Cars were packed with riders throughout lunch as they warmed their soaked bodies with heating and cups of ramen soup. Definitely an experience to remember by both riders and the support crew!

After lunch, the riders finished their 158 kilometers for the day by arriving in Seoul. The bright sun and blue skies seemed to embrace the riders as they rode into Banpo Hangang Park to the much anticipated cheers of their loved ones. Tears, laughs, and hugs were shared as riders and support crew alike comprehended the journey they had just accomplished over the past four days.

Through the ups and downs of this year’s Ride (literally), Jesus had carried us with His praise continuously on our lips. Though all of us signed up for reasons that varied individually by a degree, God brought us together as one family to fight for His justice and anticipate His glory upon the sex trafficking industry in this nation. Our hearts are full of song and full of hope to see His hand change the nation of Korea.

Thank you for joining us in prayer for the past four days, the 540 kilometers from Busan to Seoul, riding against sex trafficking in Korea. We made it!

The morning carried an especially peaceful vibe as riders and support crew started their day at 8AM—two hours later than what we had grown accustomed to over the past two days. This peace was crucial as the riders would be beginning the day’s ride accomplishing a 5 kilometer climb up a mountain followed by another 3 kilometer climb.

Courage and determination firmly secured, the riders set out for the foreboding climb. Half of the support crew traveled up and down the hill, earnestly cheering the riders on. The riders never gave in to the day’s giant, and one-by-one, steadily reached the top of the mountain, triumph shining on their faces. There was much to rejoice over: the riders had overcome the mountain, God had favorably cast cloudy weather throughout the climb, and awe-inspiring scenery at the top created an amazing backdrop for photos. Lunch time exuded with victory.

Today’s riding ended rather quickly as the riders were only expected to achieve about 90 kilometers. By 5PM, all the riders arrived at the pension, stomachs ready for a dinner of chili and ramen (tastier than you’d imagine!).

In the evening, riders and support crew split into teams and shared reflections from the past three days. Afterwards, we all gathered together to share with the group. Team Justice spoke on the significance of the song “It is Well” by Bethel for their team. One member realized that the physical up hill and down hill battles they had faced during the ride paralleled the ups and downs of everyday life. However, just as God was good in those situations during the ride, she realized that all was well even when faced with life’s ups and downs. Team Freedom Fighters recognized the beauty surrounding them throughout the ride, but then realized that God’s heart for victims of sex trafficking is exponentially more beautiful. And He is still worthy despite what might occur.

One support crew group mentioned what a blessing it was to have thrived in such a family-like atmosphere for the past three days. Many siblings, married couples, and parents and children had participated on this ride, but regardless of biological connections, we had acted in unison, tending to one another like family. And at that moment, we were not defined by our roles and experiences these past three days, but we stood as one heart, striving after His justice for this nation. 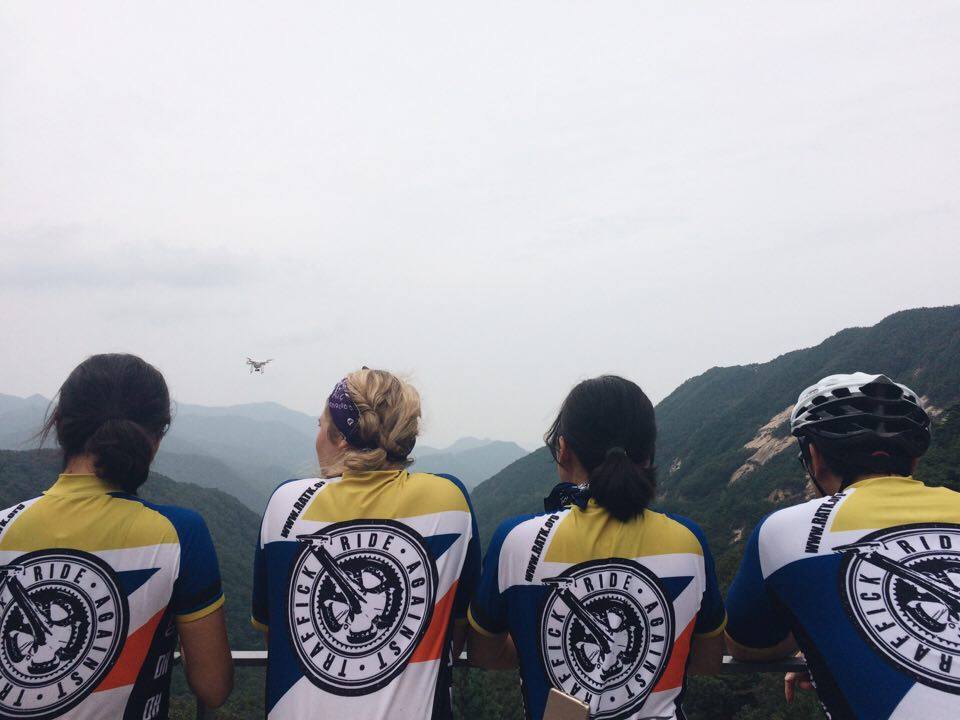 Day Two proved to be significantly smoother than Day One. The riders achieved 160 kilometers and about five hills. The relatively flat trails in the morning brought the riders to the first two checkpoints in smiles and great timing. Lunch was an early highlight of the day as riders and support crew munched on delicious tuna sandwiches, pear slices, and homemade rice balls. An amiable spirit enveloped the lunch grounds as chatter and laughter embraced. Many riders spent their rest periods dousing their aching muscles in pain relief spray (“pas”), yet their physical pain could not penetrate their spirits.

The second half of the day presented more arduous climbs than the first half had reassured; however, the breathtaking scenery and growing camaraderie within teams overpowered the climbs. This was evident in the many team selfies that surfaced on social media today. After another challenging day, the riders (and support crew!) were rewarded with mouth-watering Korean BBQ and cheerful conversations throughout dinner. Crew members and teammates were able to trade humorous and memorable moments from the day, solidifying this ride as one to be dearly remembered.

Tonight, during prayer and worship, Pastor John-Michael shared the heart behind Isaiah 66:7-8 for Korea. At times, we may view this nation as slow-changing—even hopeless—yet as Israel was historically able to become a nation in one day, so Korea too can rise victorious in the course of a day through the Lord. Circled inside a parking lot situated in a neighborhood prone to prostitution, this message impacted all of us powerfully. We ended the night responding in prayer—a hurricane ready to spread, sweep, and destroy the Enemy’s throne.

What a fiery first day! The riders accomplished 140 kilometers and six mountains, but those kilometers were not without their own particular challenges. Divided into six teams according to speed preference, the riders eagerly wiped the sleep from their eyes and set off with victory reverberating throughout their hearts. From the onset, however, the day carried the riders on an adventure brimming with trials. A broken chain was swiftly followed by two flat tires, and after lunch, a couple of minor injuries arose along with a small handful of more flat tires to supplement.

Despite the physical trials tossed at the riders, they came streaming in to each checkpoint, exhaustion clinging onto the tailcoats of their overflowing joy and determination. Inarguably, they were not being propelled by their own will, but being led by the Holy Spirit. Team leaders consistently checked in with individual team members, and team members unashamedly encouraged each other during rest stops. Though only the first day when names are still being mentally imprinted and riding chemistry is forming between team members, each team still carried a spirit of humility, partnership, and support for one another. Even at the last checkpoint before arriving at the pension, the teams were told that the preplanned shortcut was now obsolete due to the construction of a new–possibly dangerous–major road. This meant the riders would have to add two more mountains and 12 kilometers to their last stretch. Despite the potential for an attitude of defeat, the riders chose instead to approach the challenge with joy and determination as they had maintained throughout the entire day.

In the evening, after a hearty meal of grilled hotdogs and hamburgers, riders and support crew alike gathered together for our first worship and prayer session. Though plagued by exhaustion, riders and support crew were eager to share individually tailored appreciations and testimonies. Kristen Hendricks, a leader for Team Watchmen, soberly explained the flat tires that had hassled her team all day. She shared about an ahjusshi (elderly man) who approached their team after their third flat tire in the afternoon. He witnessed them pleading to Jesus for help, and attempted to repair what he could with his novice skillset. After it was semi-repaired, the team rode down the hill where, again, the same tire resulted in a flat. At that point, a man passing by rushed up to them, located a miniscule nail inside of the tire, and repaired it with astonishing speed. The previous ahjusshi who had witnessed their prayers and this quick repair by this man exclaimed how he should “love Jesus more, because He clearly answered your prayer.” Wow, praise God!

Towards the end, Pastor John-Michael Becker shared Nahum 1:7 and repeated the first four words: “The Lord is good.” Despite our trials, it is His very goodness that allows us to worship and carry the Holy Spirit with us. This was sobering to hear on a particularly difficult day such as this one was. Though our bodies bear the physical toil of riding/supporting for four days, victims of sex trafficking are not given an expiration date for the physical toils on their own bodies. They suffer countless abuse, manipulation, and domination, yet they cling on for fear of their own internal brokenness consuming them more than these external influences. We were not consumed today and will never be consumed for the next three days, because we know the Lord is good and have tasted His goodness. But what about the victims of sex trafficking? So we ride, trusting that our prayers throughout the ride will sow seeds of His goodness into their hearts and this nation. That through His goodness, those who are trafficked will not hear the inward groans of their dry bones anymore, but the burst of a new song spilling out of their mouths. A song that has tasted and seen, and now hopes.

It’s 9:31PM and night has clocked in, dutifully watching over this peninsula. In just nine hours, we will be gathering together to begin our four-day ride against sex trafficking in Korea. Though separated by riders and support crew, our hearts will, nonetheless, all be riding on His irrepressible justice and arresting mercy throughout the climb from Busan to Seoul. Join us in prayer as we sow seeds of change, as our tracks solidify His blueprint for His kingdom here, as we cry out for those whose own voices have been swallowed by their trespassed bodies.